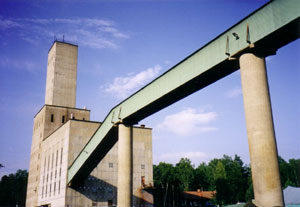 By: Mattias Huss
Photos by: Eva Örndahl and Mats Renvall (the camping picture)

Imagine a dance tent at the Roskilde Festival somehow transported to the middle of nowhere: a small mining town a few hours north-west of Stockholm. Add a giant factory building of concrete and ever droning hypnotic soundscapes from every direction.
Still your imagination may not be enough to grasp the strange setting for the Norberg Festival. Housed in the factory buildings above the shaft of a closed mine, it must be an interesting setting for the sound fetishists that make up the program for this festival of electronica, both obscure and hip. The above reference to Roskilde points to another peculiarity; everywhere around you people are chatting in Danish. The festival is organised almost entirely by Danish enthusiasts, and Sweden should be very thankful to its neighbour for giving us this cosy celebration of adventurous music every year.

The festival area is pretty small, allowing fast transport to the five indoor stages; one ordinary, the smaller "8-bit room" without an actual stage (where the audience can stand on all sides of the artist), a bar tent featuring DJ:s and a kind of chill out tent for movies and other oddities and, most impressively, the multi floored venue Mimer.
Mimer is the main chamber of the tall old mine building. The "stage" is located on the second, open floor of the room, and the audience can see it from the first floor or climb up a number of stairs to watch the band from the side or from above. Alternately, you could chose to just lie down on the concrete floor and let the music fill every crevice of the room and wash over you. Given that most of the artists cared little for any visual output - save for some rather unimpressive wall projections - many chose to do that. 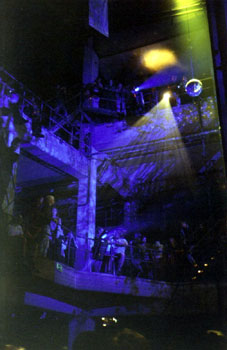 People digging Pan Sonic in the mine and Pan Sonic on stage.

The free tables in the bar tent made me think that few people had turned up this year, but when headliners Pan Sonic pushed the start button, Mimer was filled with the shining points of glow-in-the-dark earplugs. Pan Sonic diverged completely from their album material, dwarfing the rest of the festival's performers by pumping up the volume and the bass and delivering a deep, rumbling symphony of noise. Together with a few of the other big names, notably Panamerican, they seemed to have given the special characteristics of the venue some thought in their preparations. Pan Sonic managed to completely saturate the space with sound, sometimes reminiscent of mining wagons sliding along rails deep inside the earth. 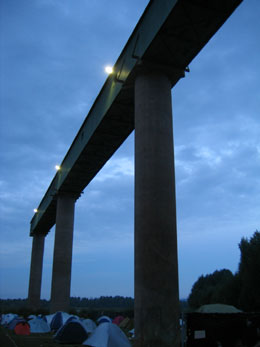 While covering a rather narrow musical territory, Norberg Festival managed to serve a varying meal of ambient, noise, house and glitch electronica. It was nice to be able to counter the dark droning noise of Olle Oljud with the melodic dance music of Bauri. Also, I can't think of any other festival where I could see someone treating a theremin like a slap bass (Muslaban), singing from inside a coffin (Johannes Bergmark) or transforming TV static into sound and back again live (Gert-Jan Prins). The festival is above all a great testing ground for sound experiments, so don't come looking for the regular festival experience. There is just one place for warm food, no proper vending stalls and precious little in the way of sex, drugs and rock'n'roll.
On second thought, those looking for sex could venture into the entertainment tent in the camping area. Every day the, uh... performance duo Mads & Mette led us on a happy Scandinavian pornography romp with their vaudeville show featuring silly body gloves, Monthy Pythonesque animation films and very explicit lyrics in incomprehensible Danish. I lack words to even describe the experience; priceless will have to suffice. 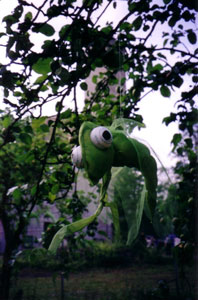 The mine or the music has strange effect on the local fauna.

During the two of three festival days I visited the festival, I saw performances by numerous young men I had never heard of, with laptops and almost no vocals. The relative anonymity of some artists and matters of taste make it hard to deliver the kind of judgments of quality that are expected from a reviewer, so I'll settle for a few reflections. While the legendary Swede Håkan Lidbo left me cold with his purist solo set, Unai (also Sweden) managed a dynamic, hard beat while Norwegian Råtasseriet conjured up an enchanting atmosphere. Danish Rumpistol (meaning "Space Gun") used his machinery in pursuit of beautiful melodies and interesting oddities, often finding both.
Going home, I was happy to have come, with very few objections. Finland and Norway were scantily represented for a festival with ambitions to cover Scandinavia, and those festival T-shirts really should have been for sale. But the impressive fireworks on the last night and the Danish beer kind of compensated for all that.
A final word to all of you who will hopefully swarm the place next year: Quiet is not the new loud. Until Norberg dares to become even more experimental and lower the volume, bring those earplugs, glowing or not.