Rising up from the ashes of the stale psychedelic trance scene, like a loved up phoenix, Astral Projection have left the days of white labels and goa compilations. Israeli superstars Lior Perlmutter and Avi Nissim moved to the country-side to keep their music pure.

Einstürzende Neubauten wannebees?
Everything is connected. Astral Projection would like that sort of comment, with their love for spirituality and spacey imagery. But it's true. The thin threads connecting everything can be seen all around us. Like here, at the Arvika Festival, with the world's biggest trance act appearing on the same stage as Einstürzende Neubauten and Laibach.
- These guys were our idols when we were like sixteen, says Lior Perlmutter. We heard their music and said "Wow! This is the stuff we want to do". I don't think we ever dreamed that we would be playing on the same stage as Einstürzende Neubauten.

A healthy diet of body music
Let's follow this thread back into the eighties, to Israel where a couple of guys grown up on a healthy diet of body music and industrial start out making heavy electronics. Lior again:
- Avi got these tapes from England in 1988, you know, the acid house era. He started playing them as a DJ at clubs in Israel and those were the best parties ever.
- Thanks, says Avi.
While Lior does the talking, Avi is the quiet guy with something up his sleeve. Lior is the engineer, and Avi is the DJ. On stage, Avi provides the drama. It's not much, but he is the entertainer up there, pointing his finger into the air and doing his "I'm gonna push this button and you're gonna dance"-gesture.
Of course, Lior and Avi got together to make some serious music. They started a couple of labels and recorded under a number of names, the most famous of which was SFX.

Hitting in Goa
On the "Trust in Trance" compilation, most of the tracks were made by what would become Astral Projection. Soon things got big. Still, Lior says they weren't all that connected to the psychedelic trance scene in the beginning.
- In 1991, some guy came back from Goa and said, "hey, listen guys. They're playing your music in Goa". And we said "Where? Where is that?" We were quite surprised. In Israel, trance has always been huge.
- Yeah, says Lior. It's bigger than pop music. There is not a car that goes by where you don't hear some electronic music coming out of it. It's probably because Israelis really need to break free, at least in their minds. With the current political situation, Israel really is a pressure pot. There is a lot of stress, so people need this. They need to fly in their minds.

Hard to live in Israel
And Astral Projection provides the opportunity. There is nothing political about that, and yet, in some way it is very political. Perhaps in the very rejection of politics. At the time of the interview, Israel and the Palestinians were desperately negotiating a peace treaty in the United States. The negotiations, of course, later broke down.
- We try to stay disconnected from the political situation, because it can be very depressing, says Lior. We have to stay pure and naive in our music. We used to live in the city, but we've actually moved into the country-side for that reason. Five days of the week, I'm just home and don't even leave the yard. It's hard to live in Israel with the political situation being as it is, and it's very hard to avoid it because it's everywhere around you. Even if you don't know what is going on, you can feel the pressure.
That pressure is bad for a band that specializes in creating powerful surges of wide-eyed, boundless, mindless joy. For Avi and Lior, creating music is a spiritual need, and their spirits are high. Don't expect any horrorcore angst tracks in the near future.
- I don't think it's in our nature, confirms Lior. We could try to make a dark psychedelic down-under song, but it always ends up being a nice uplifting, happy track. 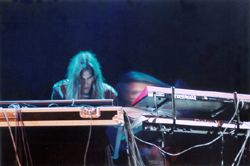 Astral Projection live at the Arvika Festival in July 2000.

People can fly
Astral Projection is growing into a "band" in the rock definition, having left their anonymous compilation days behind them. This new role means remixing Faithless tracks and playing concerts for thousands of people in Mexico City. While being slightly uncomfortable about the live situation ("getting lost in the studio is the best time, ever"), they seem happy with the development.
- Ten years ago we were underground for the sake of being underground. Today it is the exact opposite, says Lior. We want as many people as possible to listen to our music. That's the greatest trip a musician could have. And we do this for satisfaction, to satisfy our needs to make music. You always have to be ready to take your music to the next level.
That is the structure of trance, and of Astral Projection. The climbing ever upward from one level to the next. Like this night in Arvika, Sweden, after the rain.
First, there's a faint pulsing sound. Standing in a crowd of maybe a thousand people, you can physically feel an expectant tension building around you as the sound picks up speed. The build up reaches its peak, a slight pause follows and then the frantic beats kick in. People start jumping, and melodies weave their way around the beats, angelic voices drifting into their midst.
Saying, people can fly. People can fly. The beats intensify, the lights from the stage bathe us in colour and tired dancers pick up their jumping again. Forever and ever.