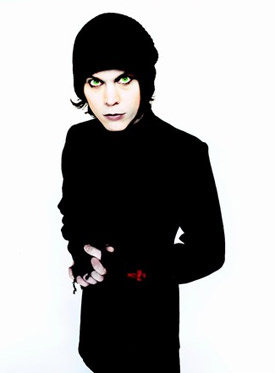 A man whose name means light has brought dark romance from distant Scandinavia into orderly European homes everywhere. We sent our partly Finnish journalist Matiias Huss to find out more about Finland’s biggest rock star and Him poster boy Ville Valo. He spoke to Release about money, music and melancholia. And of course, love.

No autograph assaults in Stockholm
If I were meeting Ville Valo in Hamburg or Berlin, there would in all probability be crowds of fans camping outside the record company building. In Stockholm, where the interview takes place, he has no such problems. The major papers haven’t grasped the significance of his presence yet, even if the rock magazines are slowly catching on. Sweden may well be one of the last places in Europe where Ville Valo can still go shopping for milk without being assaulted for autographs. My first sight of him, leafing through a thick biography on Iggy Pop between interviews, is a tell-tale sign of his encyclopedic knowledge of rock’n’roll trivia. His last name, Valo, means light, but in the world of Him, darkness is prominent.
- I couldn’t fathom anyone singing about his or her breakfast, butterflies, or something like that to our kind of music. If there is light, there is also darkness. The heartagram is a symbol for that divide. 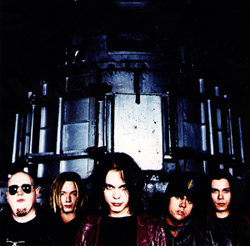 So Him is about dualism. Darkness and light, love and death. Life is perpetually divided, and so is the general public, at least when it comes to Him. The band has found an enormous audience, not the least part consisting of young girls in Germany and middle Europe, many of them from the gothic scene. While that audience has been very happy with the romantically morbid output of the Finnish gloom troop, Him have witnessed the disapproval of the musical underground with every record sold following the incredible sales figures of "Razorblade Romance": almost one million copies to this day. Numerous reviewers, including ones from Release, have treated Him very harshly with accusations of cynical commercialism in their musical production.
But that’s not how it works, is it?
- This band was formed because of Black Sabbath, says Ville Valo, mildly irritated. We were inspired by Kiss, Iron Maiden and all those bands. They were all mainstream bands that sold shitloads of records. Of course we dreamed of being like them, maybe go to Hollywood one day or something. But when we make a record, we have no idea if it is going to sell or not. We have never, ever had any marketing people involved in the making of our music. We make the record, and then the marketing people hopefully manage to sell it. If it sells, is it our fault?
Of course it is their fault. There are a number of inescapable facts that set Him apart from the anonymous, toiling hords of Scandinavian metal bands and take them into the sphere of popular interest. First, occultism, vampires and other sub-cultural trappings don’t seem to interest them much. Secondly, their music is very accessible, stylistically diverse and melodic with clear, strong vocals instead of hellish grunts. Third, and most importantly:
- We don’t have enough of those really tight, black leather pants! explains Ville.
Well, that might be an explanation... Still, the anger from the musical underground seems to be due largely to the following facts: Ville Valo looks too good, his band uses trappings of the metal scene but sometimes leans musically towards Bon Jovi, and sells too many records to people who normally wouldn’t buy a metal album. Is there a teeny tiny bit of jealousy I sense here?
- We obviously want people to buy our albums and play live in as many places as we can. I think it's just fabulous that teenage girls like our music. I mean, if I hadn’t heard Kiss in my teens I wouldn’t even be doing this. I really don’t see the problem. 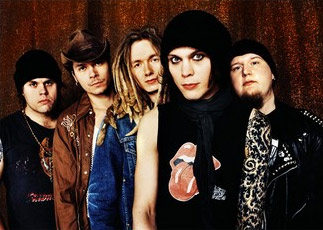 A tribute to their idols
The latest album "Love Metal" is the fourth by Him, and in many respects it represents a homecoming. Like their first album “Greatest Love Songs Vol 666” - it was produced by their old friend Hiili Hiilesmaa, who with his knack for guitar riffs (Hiili has produced Finnish metal bands like Amorphis and Sentenced) brought back a forcefully direct approach generally missing from the albums in between.
- I look upon our previous output as a trilogy, says Ville. They show a band learning to record albums. We had been working without rest for a number of years and felt that we needed a vacation. So the rest of the guys took a break and I wrote some new songs. The idea was to make an organic rock album and show off some of our own idols like Black Sabbath, Led Zeppelin and Pink Floyd. It was like a combination of all our former albums. Hopefully we picked the best parts and not the lousy ones... Time will tell.
The album takes off at full speed with “Buried Alive by Love” and balances the band’s rather ballad-choked repertoire with some fast, dynamic songs. 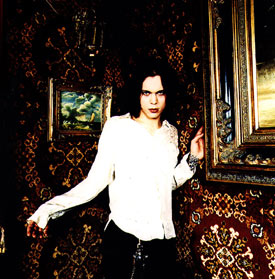 Goth or Scandinavian melancholy?
The subject matter though, has retained all its spleen, making me wonder where Ville’s perpetual musings on love and death actually come from. The landscape of lovers’ tombstones, angels crying blood and spiritual murder present in the lyrics brings to mind gothic literature classics like ETA Hoffman or Sheridan Le Fanu rather than the heavy metal fantasies of hell and the apocalypse.
- I think it is more about the Finnish folk tradition I got from my mother's milk, claims Ville. That is all there, and some Finnish writers are so overtly melancholic and gloomy that their writings become a celebration of gloominess. My parents also listened a lot to (Finnish singer/athlete/actor with a strong sentimental streak) Tapio Rautavaara. I got subjected to all this at the same time I was into the Rolling Stones. Him is what came out.
But the melancholy present in the music of Him is not something only the Finns should be proud of, if we are to believe Ville. Him share their particular “Slavonic melancholy” with the rest of Scandinavia.
- You can hear it in all different sorts of bands. The Cardigans' new album, for instance, sounds really American, in a Neil Young-sort of way. Still, it has this intangible melancholia that an American band could never do. I don’t know what it is, some particular Scandinavian wistfulness. It’s positive thing, not something we should run away from.

Him drummer played with Kent members
Him, indeed, does not fear the big feelings. Despair, hope, desire and disgust are described in words so serious and laden with cliché that they rise beyond cliché and become something else.
- The songs tell the story of what a powerful force love can be, says Ville. People are still asking us what love metal is, so this time we decided to show them once and for all with this album. This is what love metal is about. For instance, when I write “We are like the living dead”, I’m talking about how love can blind you and turn you into the walking dead, a puppet. And love is the master of puppets, see?
The last playful metal reference is just one in an endless string of nods to various artists from Depeche Mode through WASP to Type O Negative and Roky Ericson. Facts sift through the flow: Ville is apparently a big fan of reggae music and their drummer Gas Lipstick hails from Eskilstuna, Sweden where he used to play in bands with members of Kent.
The name issue that Him was having with an American experimental dub outfit of the same name - leading to a temporary sex change for Ville’s band in the US when the name was changed to Her - seems to be sorted out. Expensive videos starring American movie stars are in rotation. After a bit of a stand still following the release of ”Deep Shadows and Brilliant Highlights”, Him seem to be on a roll again.
It is high time. After all, there are oceans to be crossed.