Being an essay concerning an anomaly in contemporary popular music known as "Pan Sonic", and an attempt to place this phenomena in the post modern context of high/low culture. A short interview with one of the instigators of this phenomenon, as well as extensive research and analysis of the sound output, form the basis of this pseudo investigation.

The main questions
What is Pan Sonic?
Pan Sonic are two Finnish gentlemen, Mika Vainio and Ilpo Väisänen, living in Barcelona.
What is Pan Sonic?
Pan Sonic means roughly "all sound" or "sound everywhere".
What is Pan Sonic?
Pan Sonic create precise, minimalist works of sound using primarily homemade tone generators and analogue machinery.
What is Pan Sonic?
Pan Sonic are a paradox. Scholars and amateurs alike are divided amongst themselves as to what Pan Sonic actually do.
One main school of thought emphasises the duo's affinity with classic industrial music, noting in Pan Sonic's approach to sound a kind of perverted scientific method. Those who understand Finnish detect this, not only listening to the music, but in the album and track titles. Examples from the latest record include "Vaihtovirta" (alternating current), "Ulottuvuus" (dimension) and "Kierto" (circulation). Mika Vainio gave some credibility to this attempt of labelling Pan Sonic as essentially industrial when referring the background of the band, but didn't completely endorse it.
- In the early eighties, we were very interested in industrial music like Throbbing Gristle, Einstürzende Neubauten and Suicide. Eventually our musical tastes turned toward reggae, hip hop and experimental music. When acid house began, that obviously heavily influenced us, but we haven't been following that scene either for several years now.
The second school of thought, of course, deals with acid house and techno. These musical styles have also been known for scientific iconography, and the followers of this theory describe Pan Sonic's sounds as Detroit techno stripped to its bare essentials, and then some. Perhaps one needs to imagine a Detroit relocated to Finland in a very cold winter, to get a clearer picture of the sound.
But still, this school of thought stresses, in all its minimalism and surgical precision, it remains essentially funky. Vainio himself insists that Pan Sonic's sound should create positive reactions in it's audience, which is a stance more typical for electronic dance music than hard line industrial. But even here, Vainio is ambiguous.
- Mostly, we just want people to enjoy our music. Some days, when there have been lots of problems setting up and the sound people are stupid, there might be a show with really aggressive vibes where we just want to cause trouble. 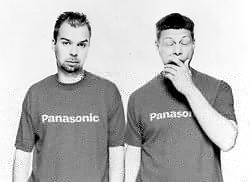 A brief history of Pan Sonic
The beginnings of Pan Sonic lie, together with much of Finland's interesting electronica (Jimi Tenor among them), with the Sähkö/Puu imprint. After a debut single on that label in 1994, they were picked up by Mute Records' subsidiary label Blast First!, where they have to this date released four full-length albums and a couple of EP:s. The most recent one, "Aaltopiiri" will be further described in this essay.
Pan Sonic have also collaborated on an album with Alan Vega of American industrial/techno outfit Suicide. This is as of yet the only Pan Sonic project featuring vocals. Mika Vainio has confirmed, before his embarkation on a world tour, that another vocal excursion will soon take place.
- At the end of this tour, we are going to record something with a classical choir in Iceland. We've enlisted the help of Barry Adamson. I don't know quite what will come of it, but it sounds interesting. We certainly don't have any experience with this sort of thing, but then, Barry Adamson does.
Pan Sonic have also recorded an album with the former member of Einstürzende Neubauten, F M Einheit due out in the summer of 2001. Vainio says Japanese noisemakers Merzbow and Masonna are possible future collaborators. 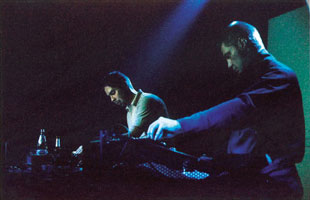 Is it funky, is it art, is it music?
Pan Sonic seem equally at home on stage as in modern art galleries around the world. The year 2000 saw them working an installation in musician and legendary The Wire journalist David Toop's sound art exhibition "Sonic Boom", and through the years, they have participated in many similar projects.
On the other hand, I myself saw them in 1997, performing in a rock club as a warm up act for The Swans. Even in that context, the two gentlemen remained restrained, standing practically motionless behind their strange machinery, tweaking knobs. While behind them a white oscilloscope line vibrated in reaction to the sounds. Still, it seems Pan Sonic want to stay in the world of popular music, despite their ventures into the highbrow art world. They have been known to refer to their music as "horsemeat rockabilly" and other cryptic things, implying that they are aiming at organic music rather than unlistenable sound experiments. Mika Vainio seems satisfied doing both.
- We have always been interested in lots of things. I wouldn't be satisfied with just making an album and touring all the time. I'm happy with trying all kinds of experiments.
The sounds of Pan Sonic have changed in time, veering between threatening static and warm ambience. Dub effects, metallic techno rhythms and harsh power electronics are playing musical chairs on the albums, making all kinds of labelling difficult. That goes for the brand new "Aaltopiiri" (meaning "wave circle" in Finnish, a word Vainio and Väisänen made up) as well. It starts out sounding a bit like Autechre and similar brain dance acts, but gets a lot noisier toward the end, closing in on Japanese sound territory.
All in all, the acid house school of thought would seem to be gaining ground with their opinions with this album. Ilpo Väisänen's recent solo album "Asuma" on the other hand, is even more minimal than anything I'm used to hearing from Pan Sonic. To quote the editor of this magazine, "it sounds a lot like half of Pan Sonic".

The cosmopolitan Pan Sonic and the Finnish scene
Several years before the Finnish music business had their big break, thanks to watered down euro dance act Bomfunk MC's and glam goth rockers Him, the difficult and uncompromising Pan Sonic was already a phenomenon in the UK. One must suppose their timing was exceptional; injecting a dose of well-needed strangeness into the purist English club scene.
Whatever the case, Vainio and Väisänen, as well as compatriot and international star Jimi Tenor, live in Barcelona today. And they are quite able to support themselves with their music. Being restricted to the Finnish market, that would have been impossible, and today many Finnish bands realise they too might have a slim chance of taking their stuff abroad. In the formerly introvert, rockist Finland Mika Vainio confirms that things are changing.
- I think today people are really following what happens in the world. The language used to be a big barrier, but in our kind of music that's not a problem. During the last years, lots of new clubs and promoters have appeared. There is also a lot more people coming to see our gigs in Finland than ever before.
It should be noted here that Mika Vainio has in fact written music with a certain Jaakko Salovaara in the not so distant past. Salovaara has since gone on to become the hidden mastermind of Bomfunk MC's. In the same way, most of the bands of the exploding scene of Finnish techno have a shared past in a tiny underground rave scene. Plenty of these bands have acquired international fame, but Pan Sonic were first.

Afterthoughts
With these words, I conclude this essay. My studies have not enabled me to understand how Pan Sonic successfully managed to popularise this traditionally considered very uncommercial form of machine music. Perhaps it has something to do with the strange analogue monstrosities built especially for the band by their friend Jari Lehtinen for use as instruments. Somewhere inside the boxes of oscillators, along the wiring of the cross connection boards I swear that sometimes the cold static turns subtly into a tribal dance, a slow blues and the faint echoes of dub. Even rockabilly.
In the funky machine.

Panasonic at Mute Records
Unofficial site the best one